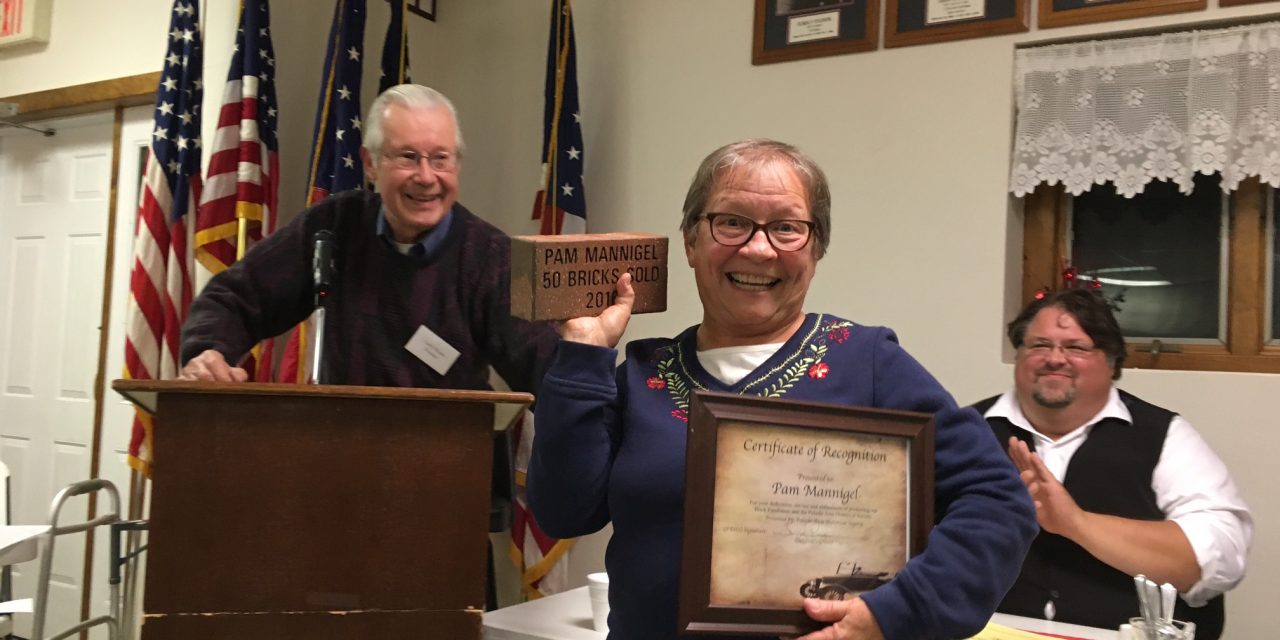 President Larry Puzen called the meeting to order at 7:00pm at the American Legion Hall.

The 50/50 raffle winner was announced with a take home of $142.00. Congrats to John Gracyalny! Everyone was instructed to look under their placemats and whoever had a picture of Casimir Pulaski was the winner of the African violet on their table.

Carol Puzen led us in prayer.  We then enjoyed the always fantastic catering by Super Ron’s of chicken soup (roz l’kury) and duck soup (czarnina) along with baked chicken, polish sausage with sauerkraut, green beans, dressing, coleslaw, buns and cheesecake.

Larry started the program at 7:30 with the Secretary’s report. Richard Styczynski made a motion to dispense with a reading of the report. Tammy seconded. Motion carried.

Larry Szymanski asked everyone to get a copy of the treasurer’s report from under their placemat. The checkbook balance as of October 1st, 2016 was $7,610.50. Our income for the year was $11,376.14 and our expenses were $9,288.32. He also explained a graph showing community interest in the museum is growing. Pat Budz made a motion to approve the report. Joan Laubenstein seconded. Motion carried.

The officers and board members were introduced. Larry Puzen, president; Chris Jaworski, vice president; Norine Heuser, Secretary; Larry Szymanski, treasurer and board members John Mihalko, Tammy Brzeczkowski, Don Mannigel, Sharon Bauer, Mike Blohowiak, Katie Walters, Jim Zajac, Claudia Ryczkowski and Roger Brzeczkowski. Larry then explained the terms for Tammy, Rock and John were expiring but they all agreed to serve again. Mike Maroszek made a motion to accept them for another term. Richard Styczynski seconded. The floor was then opened for nominations. Richard Styczynski made a motion to close nominations. Richard Kabara seconded. Mike Maroszek then made a motion to accept the three nominees. Roger seconded.  All approved.

Tammy told everyone the fall newsletter was available to be picked up at the registration table. Anyone taking one home will save us postage. We just need you to sign your name so we know who has one.

Mike Maroszek then mentioned a Polish trip to Chicago he is sponsoring sometime around Easter. It will include a trip to a Polish grocery store and a basilica for Mass.

Everyone was reminded to keep an eye on the ongoing pie auction to check their bids.

John Mihalko reminded everyone that our society covers everyone in the Pulaski Area School district which includes not only Sobieski, Krakow and Oneida but everyone in our 3 county area.

Rock Mannigel introduced our four students who work at the museum this year…Emily Johnson, Jenna Socha, Juliah Linzmeyer and Jackie Nassios. They work on Tuesdays from 3:00pm to 5:00pm. It’s a great opportunity for students to gain community service hours.

Claudia explained our museum will be open on Tuesdays from 11:00am to 5:00pm. Volunteers are always needed especially on Tuesdays when 4-6 are needed. She and Sharon Bauer coordinate this group. She also mentioned a list under everyone’s placemats showing the various events you can consider helping with. The museum was open 172 hours this year with 67 hours during Polka Days and 150 volunteer hours during the summer.

Marian’s curator report began by explaining the trivia question and answer displays on everyone’s table about goings on during earlier days in Pulaski. She then explained several requests she had worked on for some families. She was able to help a 70 year old gentleman visit a farm he was on last when he was 9 years old. A New Berlin family requested information about their grandfather, Frank Paprocki, who is responsible for Pulaski having electricity. The museum lent articles to the high school for the musical Fiddler on the Roof. They helped Dennis Jacobs with his presentation on early Pulaski. High school students helped with the museum spring cleaning. We unearthed a time capsule that had been buried in 1992 and buried a new one to be dug up in 2026. She thanked Bruce and Tammy Brzeczkowski for putting up a display for our museum at the Shawano County fair. Our current family display is the Szeczpanski’s. If anyone would like to showcase their family, just let us know. Our kitchen has several old place settings that were lent by some families. Our World War I display built by Larry Puzen and Ray Mroczynski is very well done and very informative. They are continuously working on filing our information to make it easier for everyone to access.

Dennis Jacobs then gave a very interesting and informative slide presentation of Pulaski’s founding. He works for the Brown County library in the genealogy department.  He had an early map of 1885 when there were no houses and all was forest land. The first people arrived in 1883 and by 1885 there were 35 families, a saw mill and a store. JJ Hof sold acreage for $15.00 per acre and would receive $1.00 commission per acre sold. He found a newspaper article about the Peshtigo fire during which Hof used his office in Sobieski as a temporary church.  Our first post office opened in 1890-1891. In 1894 Hof went to Poland to get more people to come to Pulaski. There currently is a map at our museum showing the land he was selling at that time. In 1905 the Pulaski State Bank formed with opening stock worth $25,000.00. In 1907 a livery stable and the Chicago Northwestern Railroad arrived. By 1909 Pulaski had a population of 400 people. On May 7, 1910 Pulaski was incorporated into a village. Also in 1910 the Farmers & Merchants Telephone Company was formed.  JJ Hof died in 1910 and is buried in Sobieski.

Meeting was adjourned at 8:40pm.