This past year, we lost an individual who lived for “Pulaski”. She was an amazing person to say the least. Some might have thought she was a little rough around the edges, however I got to know her, and she had a big heart. She was an active member of our business community, the Pulaski Village, and the Pulaski Area Historical Society. As I was going through old Pulaski Newspapers, I found this photo and article that I thought I would share with all of you to help her legacy live on. I personally knew Gloria Krumrai, and truly admired her for the education she received in a time that “girls” didn’t go to college, and what she did for our community. I’ve retyped the article from the Pulaski News to give you a little more of her story, and to remember someone who was truly loyal to Pulaski and doing business locally. She told me in a conversation once recommended by Cletus J. Vanderperren convinced Krumrai to keep her business in Pulaski, to stay where she was planted. Cletus, whom was a farmer and lived in Brown County, was a member of the Wisconsin State Assembly and lived from March 4, 1912-September 24, 1994. She did what was recommended by Cletus. Her business Krumrai Chiropractic never left Pulaski,WI Her roots to this day remain in Pulaski, however, she branched out and touched a lot of lives, and I personally will not forget her. Cletus J. Vanderperren (March 4, 1912 – September 24, 1994) was a member of the Wisconsin State Assembly.

Dr. Gloria Krumrai, a chiropractor with offices at 209 East Williams Street, Pulaski, recently returned from the 1968 Chiropractic Congress and World Pageant in Puerto Rico. She is pictured at the far left. 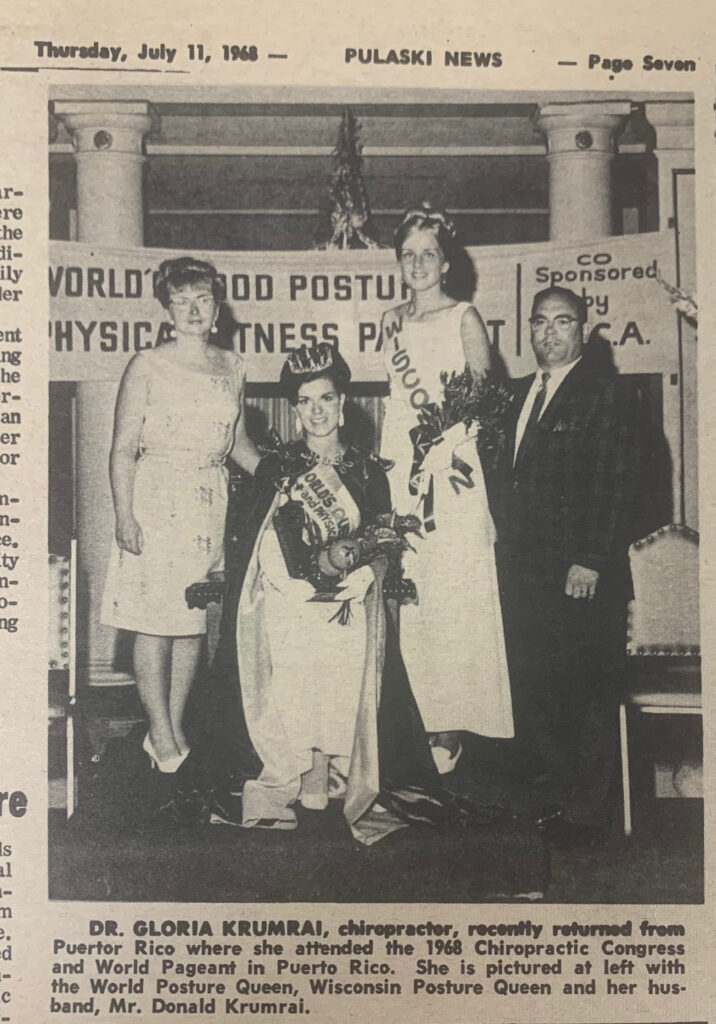 Dr. Gloria Krumrai, chiropractor, recently returned from Puertor Rico where she attended the 1968 Chiropractic Congress and Worl Pageant in Puerto Rico. She is pictured at left with the Worl Posture Queen, Wisconsin Posture Queen and her husband, Mr. Donald Krumrai.

With Dr. Krumrai is the newly crowned World Posture Queen, from Kentucky; the 1968 Wisconsin Queen of Posture, Catherine Rude, of Edgerton, and Mr. Don Krumrai.

Dr. Krumrai was one of the official chaperones for Catherine Rude who represented the Society of Wisconsin Chiropractors in the world pageant. Forty-three physically-fit beauties from throughout the United States and several foreign countries were tested on good posture, physical fitness, poise and personality.

The 1968 Wisconsin Queen of Posture will appear in parades and festivals throughout the summer to remind Wisconsin young people and adults the importance of physical fitness. She appeared at the Pulaski Festival last weekend, where she was sponsored by Dr. Krumrai, on behalf of the Society of Wisconsin Chiropractors.