Maroszek Bros. Honored for 47 Years of Playing Polka Music at Casimir Pulaski Days on May 4, 2019 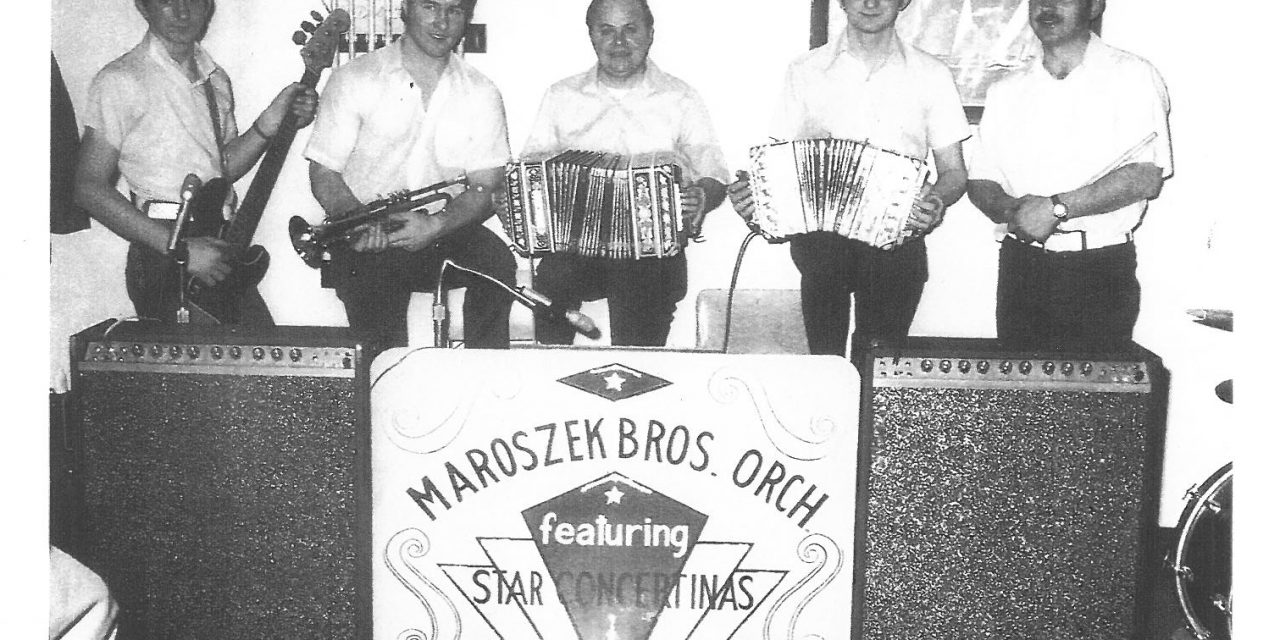 John and Clara Maroszek had a total of fourteen children (nine boys, five girls). They were raised on the family farm in Hofa Park, Wisconsin. The current farmstead is stilled owned by the second oldest son, Ronald and his wife Barbara. Mike, Eugene, Allan, Scott and John all played in the band.

John and Clara loved polka music and instilled it in their children early on. It was part of their family culture. Mike remembers listening to polka music at home on the sonograph. In fact, his gift to his parents one Christmas was a sonograph (record player) after their original one broke.

Mike also remembers sitting on the stage in Hofa Park watching Alvin Styczynski’s band play. He was mesmerized by Alvin, and as a little boy would sit on the stage and watch him all night long in Hofa Park.

Eugene and Mike worked hard during the year 1971 to practice and play polkas, to debut in 1972, New Years Eve at South Chase Bar. That’s when it all started. The original band consisted of Eugene (concertina), Mike (drums) Art Wielgus (concertina and clarinet), Rodger Henzel (trumpet), and Phil Beaumia (bass guitar).

When Phil Beaumia was absent, Frank joined in from time to time. Then in 1974, he joined the band full-time. He remembers his first job was at Bernice’s Bar. Frank recalls taking lessons from Henri’s music for a few months. After that Phil Beamia, talk him what he needed to know for playing with the Maroszek Bros. Although, he’s been through a few guitar cases

Frank still plays his original guitar from 1974 every job.

In 1976, brother Alan Maroszek started playing the trumpet, and is noted for composing 30 plus original songs for the band. “I Just Start Thinking of You”, “Here We Are Again”, “Why Not”, “Chicken Booyah” are just a few. Not all of them have been recorded.

Scott, joined in 1981 playing the trumpet. He also plays fiddle today along with the trumpet. Brother, John (Beaver) Maroszek joined the same year (1981) on accordion and keyboard.

Scott remembers picking pickles for Koepple’s to make money to help purchase his first trumpet. He would ride his bike every day for an entire summer, and pick pickles. Once he had enough money to pay for his trumpet, he quit the job with no looking back.

Throughout the years, the Maroszek Bros. played for dances, wedding, showers, birthday parties, festivals, funerals, reunions, church picnics – almost every type of celebration you can think of, the Maroszek Bros. took part in many of them. They’ve played from California to Pennsylvania.

The Maroszek Bros. band is famous for playing for polka masses, they perform throughout the country. Their very first mass was actually an anniversary mass for Alice and Arnold Rozmiarek, of Hofa Park.

Highlights of the Band: IPA Festival in Chicago, 1985-1989.  They were one of the featured bands at the festival. A Barn Dance, near Stevens Point Wisconsin in 1996/97 where over 1300 people were in attendance. Guest appearances on Alvin Stycynzski’s TV Shows (WBAY) were a favorite as well. Hofa Park Pavilion and dance halls near Pulaski and Krakow always had a special place in their hearts.

Sad Times? In 1995, just after finishing his part in recording “I Wanna Be With You.” John (Beaver) took his own life, leaving the band heartbroken and empty. They continued to play an entire year without their brother by their side. It was one of the darkest times for the Maroszek Bros. and their family.

Musicians that have played with the Maroszek Bros: Darrell Mijal (drummer) (1979-1980), Tom Ryba (1982-83) (drummer), Alan Wood (1982-1986-drummer), Bruce Brzeczkowsk (1992 to present-drummer and concertina player), Kevin Krueger (accordion and drums-2001-2010), John Wudtke (accordion, bass guitar-1996-2001) and currently helps the band. Others that have helped out from time to time, Jerry Pitt (drummer), Al Niewiadomskii (trumpet) Adam Socha (accordion). These are many musicians have sat in to play polka music with the beloved Maroszek Bros, or even recorded a song or two; like sister Karen Adams, and brother-in-law Dwane Mijal.

On May 4, 2019, the Maroszek Bros. were honored during Casimir Pulaski Days by Promote Pulaski, a 501 (3)(c) non-profit corporation and the International Polka Association, for their 47 years of dedication and devotion to their family, the polka music industry and the community of Pulaski, Wisconsin. They were honored at the historic ballroom, Zielinki’s ballroom in Pulaski. 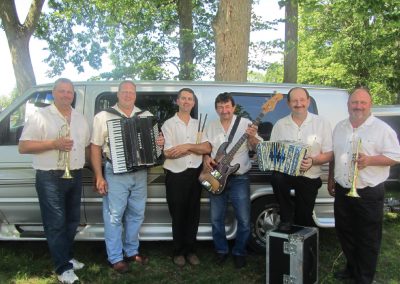 Mike Maroszek, with John “Beaver” and Scott Maroszek on the home Farm in Hofa Park. 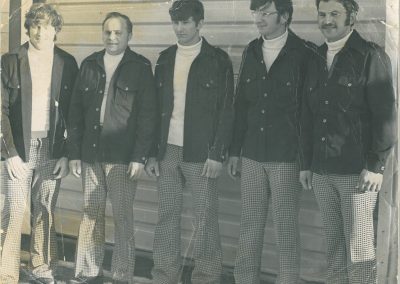 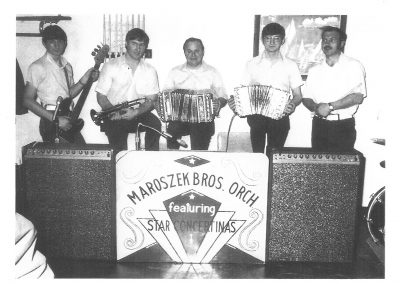 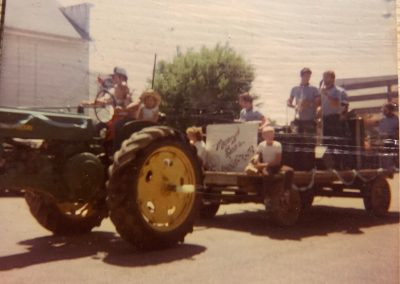 Being pulled by the “udder” brother, Ron Maroszek. 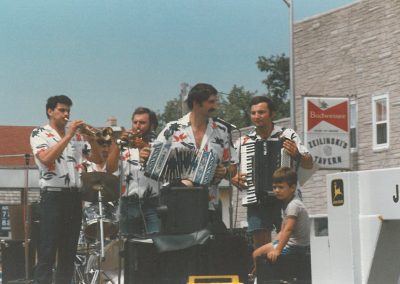 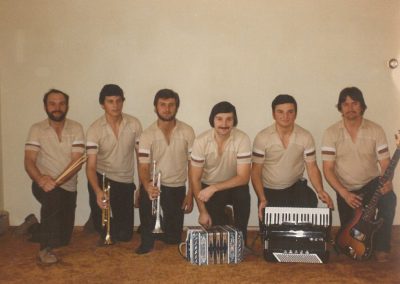 All Brothers at John and Clara’s home. 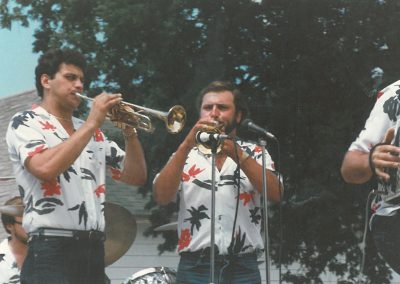 Scott and Allan on trumpet 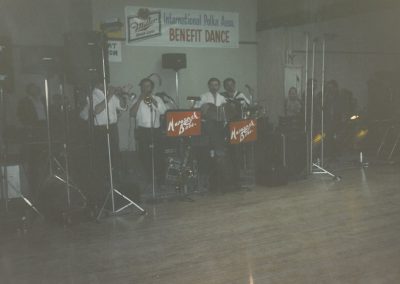 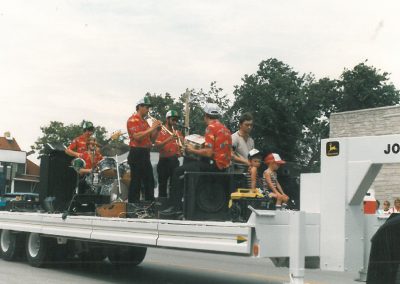 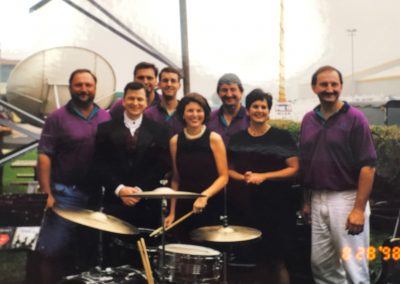 Pete and Amy from WLUK with the Maroszek Bros. 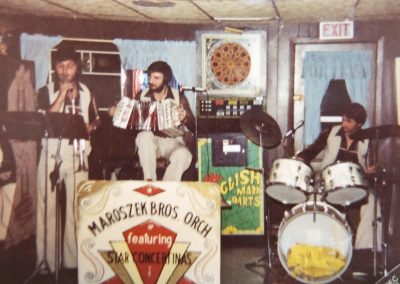 Maroszek Bros. at the Sunshine Inn in Angelica, Wisconsin