Origin of the Pulaski Franciscan Community 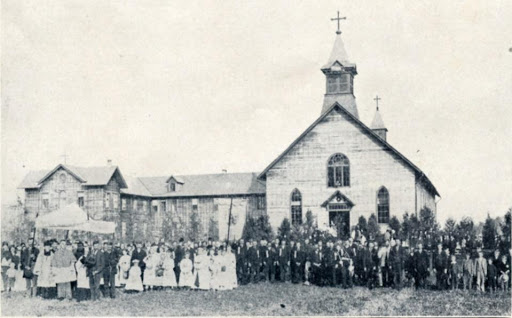 Ripley’s Believe it or Not called it “The largest rural church in the United States”.  Did you ever wonder who built it and why? If you grew up in Pulaski, perhaps you took the Assumption Catholic church for granted and never gave much of a thought to its origins.  Its founding is a fascinating story with roots tracing back to Medieval European history.

In the 16th and 17th Century, the Polish – Lithuanian Commonwealth was one of the largest and most powerful countries in Eastern Europe.  But as the years went by, internal dissent, rebellion, and the expanding power of neighbors led to its decline. By 1795, Poland had been carved up by its neighbors in Prussia, Russia, and Austria, and for 123 years (until 1918 when Poland was re-established in the wake of WWI), there was no country of Poland.  Nevertheless, the Polish people maintained their language and identity. No small part of that identity was tied up with their Catholic religion.

An event occurred in 1871 that led to a huge migration of Poles to the new world.  France provoked Prussia into a war that proved disastrous for the French. Prussia’s more modern and progressively led military overran French positions and Prussia annexed the Alsace Lorraine region.  Many Polish people living in Prussia had supported France in the war. After the Prussian victory, Poles suffered for their support of France. There was increasing Germanization. Germanization is a term used to describe the suppression of Polish culture, the prohibition of the Polish Language, and of course, the suppression of the Catholic Church.  The government also confiscated church property during this period. Czarist Russia followed similar policies. Emerging national governments during this period were at odds with the conservative and reactionary Catholic Church which opposed the historical trend away from Monarchy and towards the republican government. Poles though had no republic. They had no country, no King, no government representation.  They lived under a hostile government in a land that they had formerly ruled. But they still had their language and they still had a rich culture. And lacking a country, that culture and those traditions were held together by the Catholic church.

Many Poles choose to leave Europe or were exiled.  Between 1870 and 1915, 2.6 million Poles left Europe. Among the exiles was a Franciscan monk by the name of Augustine Zeitz.

Who was Brother Augustine Zeitz?

Brother Augustine was born Julius Zeitz in what is now Northeastern Poland near the Lithuanian border, an area that was under Russian rule.  He had been educated in Medicine and Philosophy when he joined the Franciscans in 1861 at the age of 33. In 1864 the Russian authorities decreed that the monastery could only continue to exist if it had more than 7 members.  Eight years later in 1872, the monastery was confiscated. By then, Brother Augustine had been appointed Procurator, the financial manager of the monastery.

Officials of the church and the monastery had hidden some funds in a bank account with an unrelated name.  As Procurator, Brother Augustine knew this and thus was at risk of criminal sanctions in the event that the authorities found out.  Further, restrictions on religious under these czarist reforms made life very much like being in prison. This was not well suited to Zeitz’s energetic personality.  Brother Zeitz left for America on November 4, 1872.

He arrived in New York at age 44.  Within a year, he had moved to Shenandoah, Pennsylvania to minister to Polish and Lithuanian coal miners.  Brother Augustine supported himself by working in the mines. His commitment to ministering to Polish Catholic miners included:

During this time, Brother Augustine became a United States Citizen.  He also became determined to found a Polish Franciscan community in the United States to minister to immigrants.

He was a tireless letter writer, however.  He wrote to priests in Europe. He wrote to the Franciscan General Curia in Rome.  He wrote to Monastery provincials in Polish Germany. He met little success though because there was a clergy shortage in Europe.  Further, American newspapers were reporting anti-clericalism in America as immigrants resisted ever increasing demands made by Priests. European provinces were reluctant to assign priests and priests were unenthusiastic about ministering to Americans.

Discouraged, Brother Augustine returned to monastic life in Europe. His religious superiors at the Krakow monastery recognized his abilities and appointed him procurator and made him an instructor of novices and tertiary Brothers.  But he didn’t abandon his dream. He continued his letter writing campaign, writing to priests and to Rome between 1883 and 1886, explaining conditions in America and outlining the advantages of establishing a Franciscan Monastery in America.  In addition, Brother Augustine corresponded with countrymen in America, always thinking of his dream to form a Polish community. He wrote to various friars in Europe and the US, including Fr. Erasmus Sobocinski, Fr. Stanislaus Jeka, and Fr. Jerome Schneider requesting and urging them to join his American Franciscan province.  He petitioned Rome explaining the need to minister to Poles in America and seeking permission to establish a Polish Franciscan community.

Additionally, he wrote to Minister General of Franciscans in Rome requesting permission to go to America and requesting that priests be assigned to his proposed American province.  He corresponded with a variety of land agents in New York, Pennsylvania and elsewhere, including J. J. Hof in Pulaski, soliciting donations of land to establish a Monastery. He contacted architects to secure designs for a monastery and church.

Real estate salesman and developer J. J. Hof recognized the importance of the Catholic Church to the Polish immigrants that he was bringing to the Pulaski / Hofa Park area.  Hof had donated land and lumber to the settlers so that they could build their churches. But there was a huge disaster in 1886 that devastated the settlers. A massive forest fire engulfed Pulaski, Hofa Park, Pittsfield, and the surrounding area.  It is estimated that 500 million board feet of standing timber ultimately burned. Also, 50,000 board feet of lumber that had been donated to build a church in Pulaski was incinerated. Many settlers lost everything. Hof organized relief efforts. He contacted friends and business associates for donations and contributed his own funds.  Perhaps it was part of this relief effort that led Hof to step up his development efforts in Pulaski. 1887 was also the year that Hof asked Valentine Peplinski to come to Pulaski and start a general store. After the disastrous fire of 1886 Hof was in a position to offer a certain persistent Franciscan brother 120 acres of land as well as some financial support for the establishment of a Monastery in Pulaski.

Brother Augustine had secured permission from Franciscan headquarters and the General Curia in Rome to start a Polish American Franciscan community.  He had an architect draw plans for a church and 30 room monastery. His enthusiastic letters had attracted three Priests. Father Erasmus Sobocinski and Father Stanislaus Jeka arrived in Pulaski in April 1888 after a 25-day journey from Europe.  But accommodations fell short of their expectations. The Monastery was under construction but only a skeleton that barely had a roof had been erected. The property was little more than a clearing in the wilderness that was inundated with water.   Workers were digging the foundation for the church. The priests had no source of income. Therefore, twelve days after their arrival, Bishop Frederick Katzer, assigned the friars administration of Sacred Heart Parish in Polonia Wisconsin (near Stevens Point) to generate income for the nascent province and provide them with better living conditions.  Then on August 23, 1888, Father Jerome Schneider arrived from Poland. He was fluent in German, French, and Polish. He traveled to neighboring parishes preaching missions and raising funds.

By 1889, the church was not complete.  The total cost was to be $7,345 and the Parish was $9,000 in debt.  Nevertheless, 13 religious were part of the Pulaski Franciscan Community:  3 Priests, 3 Brothers, 4 Novices, and 3 Tertiaries. But of the priests, only Father Erasmus resided in Pulaski.  Meanwhile, brother Sylvester spent his time begging alms. Father Stanislaus traveled to Hofa Park from Polonia monthly to say Mass.

The harsh conditions and winter travel was very hard on Father Erasmus’ always fragile health.  He passed away in 1890. The church was not yet complete, and outstanding debt exceeded the value of the work done. There was a lawsuit between the community and the architect. The community requested that more priests be assigned.  They requested that the 63-year-old Brother Augustine, who was much beloved by the local parishioners, be ordained. However, no dispensation was granted. Nevertheless, Br. Augustine remained cheerful and enthusiastic, displaying great faith that his dream of a Franciscan Community is about to come to fruition

In 1891, Father Jerome embarked on a missionary tour, traveling to Milwaukee, WI; Chicago, IL; Detroit, MI; Toledo, OH; Erie, PA; Buffalo NY.  No priest remained in Pulaski. Father Jerome returned exhausted and incurred the ire of the other Friars with his harsh demands. Fed up with an authoritarian priest whose demands left no time even to attend religious services, all of the brothers requested and were granted transfers to other communities.  This left Father Jerome alone to minister to 2 parishes. His harsh demands at one point had villagers talking of crucifying the priests. The Roman Curia tried to mediate with limited success. The community seemed about to disintegrate. The Franciscan community struggled for the first 10 years and almost failed.  At one point, the Bishop closed the church in Pulaski due to dissent and turmoil among the friars. But a contractual provision from Hof’s donation brought everyone together again. The Parish needed to be in existence for 10 years, or the land would revert to J. J. Hof.

Pulaski was growing rapidly during this period.  In 1887 there were 100 families in the Pulaski congregation.  By 1895 the congregation had grown to 256 families. The technology was making it easier for farmers to make a living.  Valentine Peplinski had sold his grocery store to Frank Raniszewski and moved into the farm implement business. Sales of mowers and binders proved lucrative as these machines gave farmers a significant improvement in productivity and made them more prosperous.  The congregation built a convent in 1899 and completed a stone and brick schoolhouse in 1901. This school served the community until 1958 when the current ABVM parochial school opened. By 1907 the congregation had outgrown the 1898 church. Work commenced on a new and larger church.  In the first stage, a foundation was laid, and in 1908 the first church was dismantled and the timbers used to put a roof on the foundation for the second church. Services were held there until the 1920s when the next phase of construction began with plans for a twin-steepled basilica style church.  In 1923, walls were raised for the current church. Then a temporary roof was installed and construction paused until 1931 when the final stage of construction began. With the completion of the twin 135-foot steeples, the church was dedicated in 1934. 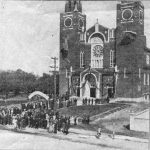 Dedication of ABVM Catholic Church in 1934

It is impossible for us to know what drove these remarkable men as they built a Polish religious community in Pulaski.  Certainly, the immigrants had a longing for spiritual sustenance. Before the Pulaski Franciscan community was founded, settlers in the Hofa Park area would trek to Seymour once a month to attend Mass even though the trek involved traveling to on Saturday and then again on Monday.  But after seeing their cultural leadership in Europe dissolve, seeing their homeland annexed by imperialist neighbors, and witnessing the heavy-handed suppression of their language, culture, and religion, there must have been a degree of satisfaction in completing a huge basilica style church that was visible for miles around, announcing to the world that the Poles are here and are prospering.

Details and chronology of the founding of the ABVM Parish in 1887 through the construction and dedication of the existing church from “The Pulaski Franciscans: A History of the Assumption BVM Province, 1887-2011” by Jerry Tokarz.

Article Written by Steve Peplinski, PAHS Board of Directors Member