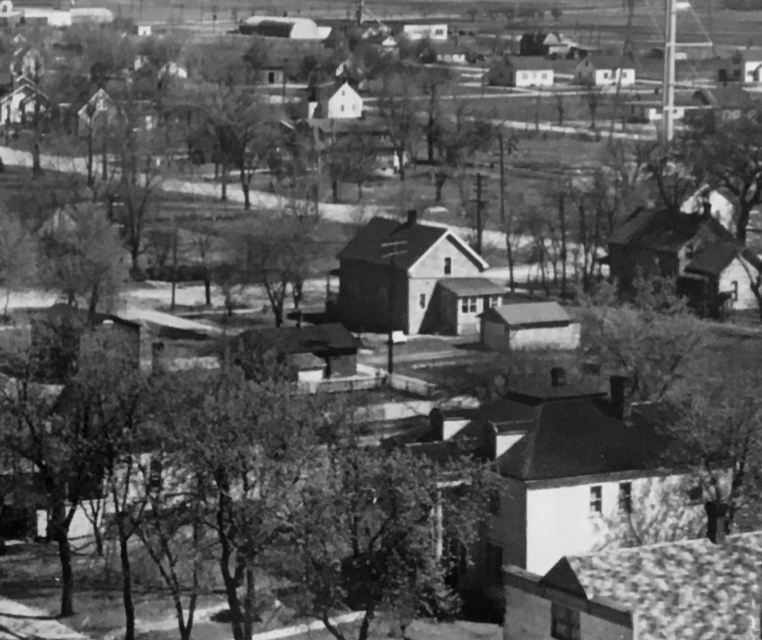 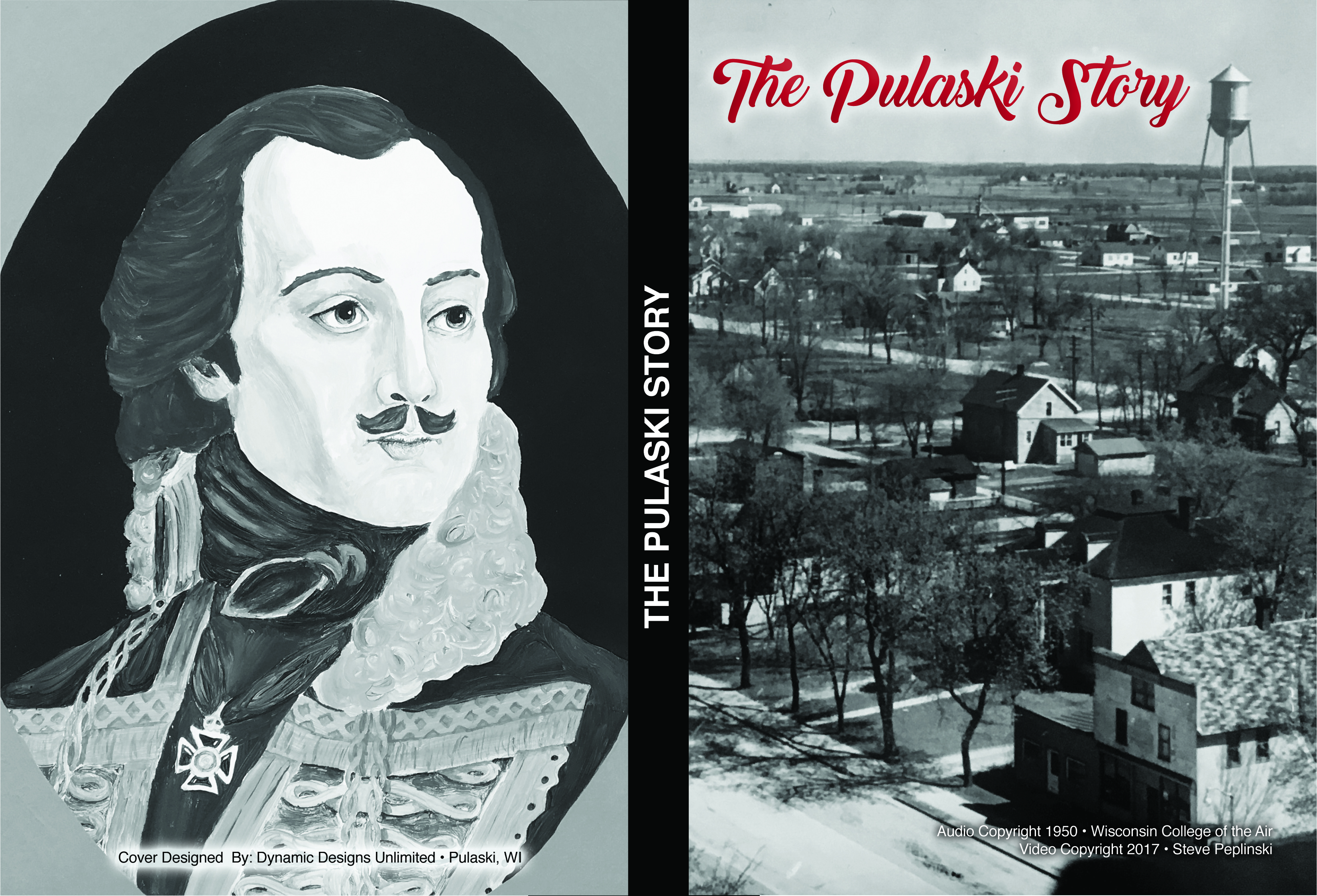 Pulaski’s history comes alive with a new DVD now available for purchase at the Pulaski Area Historical Society.  “The Pulaski Story”, created by Steve Peplinski is based on a 1950 radio program produced by the Wisconsin College of the Air. Peplinski acquired a vintage recording of the radio program.  The actual voices of residents of Pulaski in 1950 tell the story of the founding and growth of Pulaski in their own words.  Father Fulgence Masiak explains how A Norwegian real estate developer bought the Franciscans to town by donating land for a church and monastery. Val Bialozynski recounts his father’s efforts to clear the land for farming.  John Peplinski describes stringing the first telephone line from Pulaski to Angelica and starting the Pulaski State Bank in 1908.  All of these events come to life with vintage photos of the town and the pioneers who built it.

There are interviews with Pulaski High School teachers Emil Vandermause and Dorothy Keenan.  There are performances by the Pulaski High band and Girls Glee club.  The Pulaski Chase Coop, the Pulaski Merchants and Farmers Telephone company, the Farm Bureau, the Shipping Association, It’s all there.  Pulaski Industries Inc. dissolved in 2001.  But it was a pioneering industrial development corporation funded by local folks that successfully attracted Northern Shoe to town.  Frank Joswick and Bernard Lontkowski explain the how and why of it.  After Northern shoe, they went on to assist Carver Boat in setting up a manufacturing plant in Pulaski.  That legacy has had a profound positive effect on the Pulaski Community that continues to this day with Marquis Yachts, the successor corporation to Carver Boat.

After World War II, Pulaski Resident Ed Malcheski was sent to Poland as an emissary of the American People to oversee United Nations efforts to restore Polish agriculture. Though it was common knowledge in 1950, today few residents are familiar with the story.    Ed explains in his own words what it was like and why he took on the challenge.  Photos from the Malcheski family archives bring a sense of intimacy to his story.

Peplinski explained how he came to create the DVD. “This DVD represents the culmination of my 50 plus years of fascination with the 1950 Wisconsin College of the Air radio broadcast on which it is based.  At some point in my youth, tucked away in a closet I discovered a large brown binder containing six 78 rpm records.  It was a simple matter to listen to them on the family’s console record player.  Later, around 1980 I wanted my own copy.  I recorded them on a cassette tape.

Then last year I was asked if I could develop and present a course for the UWGB’s Lifelong Learning Institute.  I remembered 1950 radio broadcast and set to work looking for photos to go with the audio.

I tracked down the 78 RPM records at Mom’s house and created a clean digital copy.  I contacted the Historical Society looking for 1950s era photos.  I called relatives of those who are interviewed in the broadcast to locate family photos.  As the project started to take shape, the Pulaski Area Historical Society was very helpful.  They took an interest, and got me involved with their museum.

“I listened to the audio many many times.  It never got old for me.  I was impressed by the vision and commitment of those pillars of the community in the 1930s and 1940s who took the future of Pulaski Wisconsin in their hands and made it into something great.  They forged Pulaski Industries and the Pulaski School District into a State and Nationally recognized recognized model for successful community service and development.  As I think of this today, it is a breathtaking accomplishment.  It is a history that we can all be proud of.  This history can serve to inspire us today to work together so that the greatness of Pulaski is not only in the past, but stretches forward to Pulaski’s present and future.

“A word about the serendipity that brought this audio to my attention.  In 1950 there were no podcasts.  It was before Public Radio sold CDs or audio cassettes of their broadcasts.  In fact, it was before there was a statewide public radio network.  WJPG (founded in 1947 and the ancestor of WNFL and WTAQ) was a popular Green Bay AM radio station back then.  That’s where the public could hear Wisconsin College of the Air productions.  That’s probably also where we listened to the Wisconsin School of the Air’s  “Lets Sing” and “Lets Draw” broadcasts at Assumption BVM grade school.  Dad was a steady advertiser on WJPG those days.  The ad salesman presented the 78 rpm records to my Dad as a thank you gift.  As far as I know, there are no other copies in existence.   I was able to secure permission from Wisconsin Public Radio to use the broadcast for the Historical Society.   I have funded the entire enterprise (including reproducing the DVDs) myself and I am donating all the proceeds from their sale to the Pulaski Area Historical Society.  Every penny that purchasers contribute for these DVDs is going to the Society.”

Visitors to the Pulaski Museum (located on West Pulaski Street) can watch the DVD for free during museum hours.  The museum has an extensive collection of documents, photos, and artifacts from Pulaski’s days gone by.  Preserving these things can be costly.  If you would like to help defray the cost, you can support the museum by purchasing your own copy of this unique DVD.  Stop in at the Museum, or email pulaskimuseum@gmail.com for details.  The DVD sells for $30.00.

To order a copy by mail, contact Steve Peplinski / 4336 Thorn Hill Trl / Suamico WI 54313 email stevepep@gmail.com.  Please include a check payable to the Pulaski Area Historical Society for $33 ($30 for the DVD and $3.00 postage).